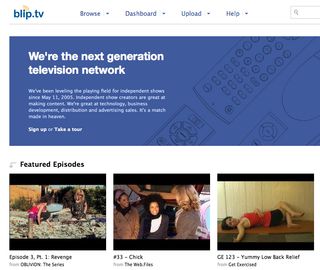 If you haven’t heard of blip.tv (or even if you have), then don’t touch that
dial!

Blip.tv, founded in 2005, doesnt charge for its services. Advertisers like Chevy, AT&T and Starbucks run media on blip.tv shows, and the company splits advertising revenue with show creators 50/50.

“Our customers, the show creators, range from individuals to big studios, said Tom Reynolds, blip.tv’s content relations associate. “Providing the best support possible is very important to us — which is why we use Zendesk. The all-in-one package of helpdesk infrastructure and forums was a big factor in our decision to move to Zendesk when we outgrew our email-based bug-managing system last year.

Tom said his company is very hands-on when it comes to support.

“Most of the time I’m handling support, with a rotating roster on weekends, but everyone in the company is on our Zendesk, he said.

“It took less than 10 minutes to teach folks here the basics. Zendesk enables us to respond to issues even faster  and if we see a systematic issue, we can then post a note on the front page of support and on the forums to deflect calls and tickets.

He added, “We’ve seen an overall decrease in support requests since adding Zendesk. Our support page is populated with FAQs and forums, and we’re seeing people spending more time there. Most people in general would rather find the answer themselves quickly and easily versus reaching out to the company.

The path to Zen

Tom said the free trial and simple set up made it easy to decide upon Zendesk.

“Blip.tv’s foundation is our content creators, and being responsive to them and understanding their needs is incredibly important to us,” he said. “We wanted to chose the absolute best support platform on the market, so we spent some time exploring options. I signed up for the free trial with Zendesk and decided to try it for a week. If it proved difficult to use, we wouldnt have continued using it. But instead, we never looked back.”

Tom said blip.tv is planning to integrate blip.tvs Zendesk with Pivotal Tracker, which the company uses for bug tracking and feature requests.