A longtime Zendesk customer, the ACLU upgraded to Enterprise Suite to create leaner and more efficient operations across its internal help desk, IT, and database teams. In addition to leveraging Zendesk native features and automation out of the box, the ACLU extended functionality and seamlessly addressed each team's needs using powerful apps in the Zendesk marketplace. 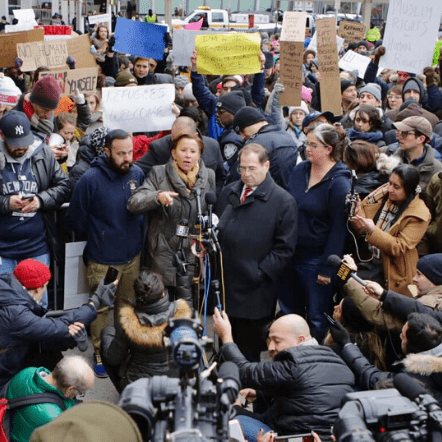 “We’re seeing improvements in agent performance, and end users are seeing a quick turnaround time. They submit a ticket, and within the hour, their issue is resolved.”

“Ultimately, Zendesk is going to allow us to become a leaner and more efficient support organization because people can get from point A to the answer they need a lot faster”

Founded in 1920, the nonprofit American Civil Liberties Union has long fought to preserve the constitutional rights of people in the United States of America, ranging from challenging anti-evolution laws in the Scopes trial to spearheading efforts to overturn state laws that banned interracial marriage. Never afraid to speak truth to power—or defend free speech and the separation of church and state—the national organization includes 53 independent affiliates with membership topping 1.6 million.

The ACLU has been using Zendesk Support since late 2012 and upgraded from the Professional to Enterprise plan in 2017—a move designed to help its IT Services and Enterprise Database teams better serve a variety of internal and external stakeholders. Although the IT team, led by Help Desk Manager Joanna Felix, was one of the ACLU’s early adopters of Zendesk, it took a few more years for the database team, managed by Associate Director Justin Birdsong, to move from a previous ticketing system.

“Our previous system was in no way cutting edge,” Birdsong said. “There were a lot of limitations to the reporting, and it was difficult to give access to other people who needed it. We had a lot of trouble getting any sort of mean performance metrics on how quickly we were resolving issues.”

Before making the switch to Zendesk Support, Birdsong’s team looked at Salesforce Service Cloud and SherpaDesk. “Since our IT team already used Zendesk, it felt like a natural fit for us to move there and see if we could use any best practices that the IT team had put in place.”

ACLU’s IT team handles as many as 60 requests per day, generally a mixture of access requests, hardware replacement, software inquiries, and tasks related to onboarding/offboarding staff. Meanwhile, the database team tends to see large fluctuations in ticket volume, since its work is affected by the seasonal nature of fundraising work—volume is often high in late summer and fall. Both teams provide email and phone support, and use Talk Partner Edition to integrate with Cisco Voice.

The ACLU has already reaped the benefits of Support’s customizable UI, which has helped the teams tailor the solution for different types of support cases. Improved workflows, due to macros, triggers, and automations, have led to gains in efficiency and a spike in customer satisfaction. In the past year, the organization’s CSAT rating increased by more than 10 percentage points, up to 90.5 percent.

“Ultimately, Zendesk is going to allow us to become a leaner and more efficient support organization because people can get from point A to the answer they need a lot faster,” Birdsong said.

The IT team has begun using Zendesk’s web form, with the goal of further improving workflows and communication between teams, and its use of tags has provided visibility into trends affecting stakeholders. “Once we were able to start tagging some of our tickets, it allowed us to see what was really going on in the organization and where we were spending most of our time,” Felix said. “Also, the kind of requests that are coming in—we’re now able to see how many people are affected, whether it’s just a handful of users or system-wide.”

Support has also enabled Felix’s team to handle common, simple requests faster and more effectively through macros. “If someone is asking for folder access—we get those kind of requests ten times a day—with the use of a macro and the ability to search past tickets, we can maintain a speedy workflow,” she said.

Being good stewards of donor data

Birdsong added, “We have business rules and policies about how we handle donor data, how we solve problems, and how we do fundraising on a shared system, and we use Zendesk Support to reinforce that.” His team often receives tickets requesting reports that will help stakeholders assess the state of their fundraising pipeline. “We use the knowledge base functionality so that we can refer to articles and use that as part of our support plan,” he said.

These improvements to how the ACLU serves its stakeholders helps the organization fulfill its commitment to being a good steward of donor funds, and Zendesk Support gives internal teams additional power to meet the organization’s stringent privacy requirements.

As the ACLU expands its use of Zendesk—it is exploring Zendesk Chat and testing the free Salesforce integration—Felix and Birdsong have started to think about new ways the solution might transform the ACLU’s support organizations. “It might be good for us to consolidate all of our support into a single organization that has really well-designated channels so we can work together in a shared environment,” Birdsong said.