The long-term effects of Millennial bashing 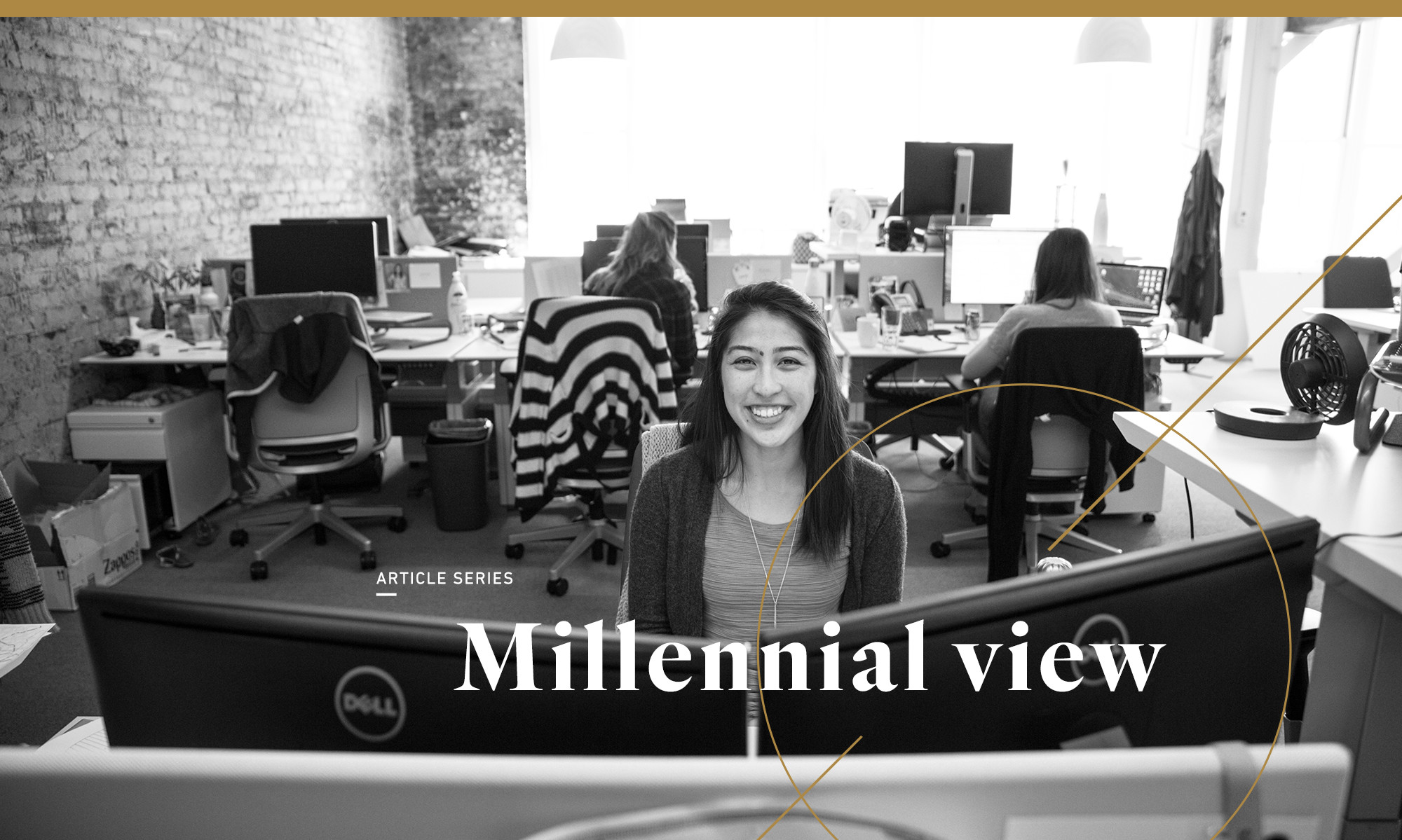 “That’s Oliva,” your coworker sneers. “She should have retired ages ago.”

You look in the direction of your coworker’s head nod and see a woman squinting through oval glasses at a newly minted laptop. You’re the newbie at work and your deskmate has taken it upon herself to give you a rundown of everyone at the company. So far it has been less than HR-appropriate and you’re feeling uncomfortable.

“Barely knows how to use our updated systems,” your coworker mutters, unrelentingly. “She’s archaic.”

Let’s take a moment to rewind this situation.

“She should have gotten three other jobs out of her system before even thinking about applying here. Nobody here has the time to coddle.” In this scenario, your team just hired a recent graduate and your colleague is giving you a rundown on the newbie.

“Barely knows how to function in the real world,” your coworker mutters, unrelentingly. “But, that’s what we get; she’s your typical Millennial.”

Most work environments are hyper-aware of ageism towards individuals late in their careers, but it’s easy to forget that those just starting out can also fall victim to age discrimination. Age discrimination in the workplace doesn’t just start as “early as 35," it starts as soon as you enter the workforce.

If you’ve been online in 2016 you’ve likely read at least a dozen articles on Millennials. A quick Google search yields titles like, "7 reasons why Millennials are the worst generation," "I'm a Millennial and my generation sucks," and "What’s wrong with Millennial employees."

Some might say the Millennial generation should learn from the criticism; we should learn to be less selfish, lazy, and entitled. Yet, complaints about the rising generation of twentysomethings are nothing new. In 1990 Time magazine released a cover story about Gen Xers with the line, “Laidback, late blooming, or just lost?”

Complaints about the rising generation of twentysomethings are nothing new. In 1990 Time magazine released a cover story about Gen Xers with the line, “Laidback, late blooming, or just lost?”

Time’s article went on to say the twentysomething generation has “trouble making decisions” and “would rather hike in the Himalayas than climb a corporate ladder.” The generational divide is repeating itself with Millennials, but this time around the consequences of generation discrimination are more substantial.

We live in a digital age where content spreads like wildfire. With so many negative Millennial articles circulating online, a powerful and expansive portrait of the newest generation entering the workforce has taken form, and it’s not exactly favorable. Millennial bashing has snowballed into a much larger problem, negatively impacting the way young individuals are viewed in the workplace, as well as during the hiring process.

Millennials have surpassed Baby Boomers as the nation’s largest living generation and Gen Xers as the largest generation in the U.S. labor force. According to Pew Research Center, “By 2050 there will be a projected 79.2 million Millennials.” This new wave of youngsters entering the workforce can be daunting to those already settled in their careers. Worries begin to circulate. Who will teach them the way things are done in the office? It will take them forever to learn the managerial hierarchy. They won’t know who to contact to get something done, and they won’t know their boundaries.

In Vanity Fair’s "Do Millennials Really Deserve their Bratty Reputation?" James Wolcott quotes blogger Duncan Black: “‘I see something nasty in the getoffmylawnism that we get today that I don’t really remember previously,” Black noted at Eschaton. “I see a lot of hatred of the youngs. It’s troubling and weird.’”

Black might not remember this much hatred of the youngs in previous generations because there simply weren’t as many mediums to rant on. Today there are endless blogs. Even blogs have blogs. As a result, conversations surrounding Millennials are plentiful—and easily shareable thanks to social media like Facebook and Twitter. Johnny Oleksinski’s "I'm a Millennial and my generation sucks" article has reached millions of readers through myriad digital mediums. Fox News interviewed the entertainment writer about his article and shared a video on YouTube. The video alone has over 21,000 views—which means next to nothing in the world of YouTube—but it’s still 21,000 people.

Thanks to the explosion of digital content, there seems to be limitless content on Millennials. Businesses have caught on to the Millennial bashing trend as a poor form of marketing, a way to reach executives who are older and more experienced. Take business owner Mayra Jimenez for example. Her article, "A Gen Xer’s Rant: What’s Wrong with My Millennial Employees?" speaks to fellow Gen Xers—those established in their careers and most likely to have more business influence. She accuses Millennials of being cocky and taking things for granted, not to mention that, “[Millennials] think they’re exempt from rules...they don’t follow through, and they don’t want to pay their dues.” Jimenez claims to have personal experiences with such Millennials, yet we see zero anecdotes in her article. Rather, all we see are sweeping statements that bash an entire generation. Where is Jimenez’s evidence?

Businesses have caught on to the Millennial bashing trend as a poor form of marketing, a way to reach executives who are older and more experienced.

Note this: Before Jimenez goes on her Millennial rant, she makes sure to spend a good amount of word count on establishing the credibility and success of her business. She writes, “We like to think we care deeply about our culture, frequently discussing our values and hosting regular company Happy Hours. I like to think that though always busy, we're a very engaging and passionate company with a slew of opportunities for growth.” Jimenez’s article exploits Millennial bashing to subtly market her business as a fast growing company that still manages to maintain good values and culture.

So blame excess Millennial bashing content vomit on marketing and Search Engine Optimization (SEO). Or blame it on a need to vent, a need to stay on trend. Blame it on an unwillingness to consider the individuals that make up the Millennial generation. And while it might be fun to share an article that justifies your feelings on how lazy your new Millennial coworker is, the Millennial bashing trend has escalated into a type of groupthink that widens the generational rift and strains relationships in the workplace.

For many youngsters, the job hunt can seem almost impossible. Especially if you feed your fears by reading articles like "Want to get work done? Don’t hire a Millennial". In the post, Michael Levin unabashedly tears the entire Millennial generation apart because of a bad personal experience. And while Levin might have had a poor experience with a young employee, his generalized rant will live online forever, adding to the negative connotations associated with the Millennial generation and creating yet another hurdle for young individuals trying to enter the workforce to overcome.

The countless articles that categorize, stereotype, and generalize individuals based on age or generation have turned what was once a generational rift into a cavernous gap. Generational tensions in the workplace can cost businesses a healthy work environment and in turn, lower productivity.

The countless articles that categorize, stereotype, and generalize individuals based on age or generation have turned what was once a generational rift into a cavernous gap.

With negative content circulating constantly, Millennials often enter the workforce on the defensive. Even when the job hunt is over, Millennials can’t breathe a sigh of relief. According to The Boston Globe, nearly half of Millennials want to be seen as workaholics, employees that volunteer for extra work or projects and work until the wee hours of the morning. The article theorizes that Millennials are a driven generation—that we are used to an intensely competitive and overscheduled environment from our efforts to get into a good college.

But perhaps Millennials want to be viewed as workaholics because we feel the need to combat the negative stereotypes that depict our generation. Perhaps the Millennial generation treats work as a competition amongst peers of who can work the hardest and the longest because we want to be the outlier, the exception to our supposedly awful generation. This creates an unhealthy environment and slowly we see the cultivation of the yes-man—the cultivation of a person that can’t say no to that extra assignment even when it means missing a family dinner for the holidays. The cultivation of a competitive, cutthroat, and self-promoting work environment.

The mindless sharing of Millennial bashing content has divided generations in the workforce and been detrimental to healthy work environments. Individuals like Levin have the right to rant about refusing to hire a Millennial again, but it’s up to readers to be more mindful with content. It’s too easy to share an article that debases a generation with a simple click. It’s too easy to read, regurgitate, and repeat without stopping to think how it might affect the communities we operate in over the long term.

Bashing twentysomethings isn’t new, but Black was on to something when he mused about an untroubling amount of hate towards the young these days. In our digital era, content has the power to reach all corners of the world; and that means it has the power to cultivate certain mindsets. So next time stop and think before sharing that article. Stop and think before generalizing an entire group of people. The Millennial generation is comprised of individuals—individuals that are in fact part of the most diverse generation so far. For the sake of the next generation of twentysomethings to enter the workplace, this is a call of action to be more careful with the content you read and share. This is a call to create a workplace culture that encourages future generations to work together.

Our Millennial series is not just for Millennials. Everyone can gain insight on these important workplace and life issues. Topics such as finding a friend in feedback, moving up, while dressing down, and sweatworking impact us all, regardless of generation.

How community nonprofits shift focus to solve for food insecurity

Around the world, more people are going hungry now than before the pandemic hit. Now, nonprofits worldwide have had to pivot their focus to offering the most essential service of all: giving food. 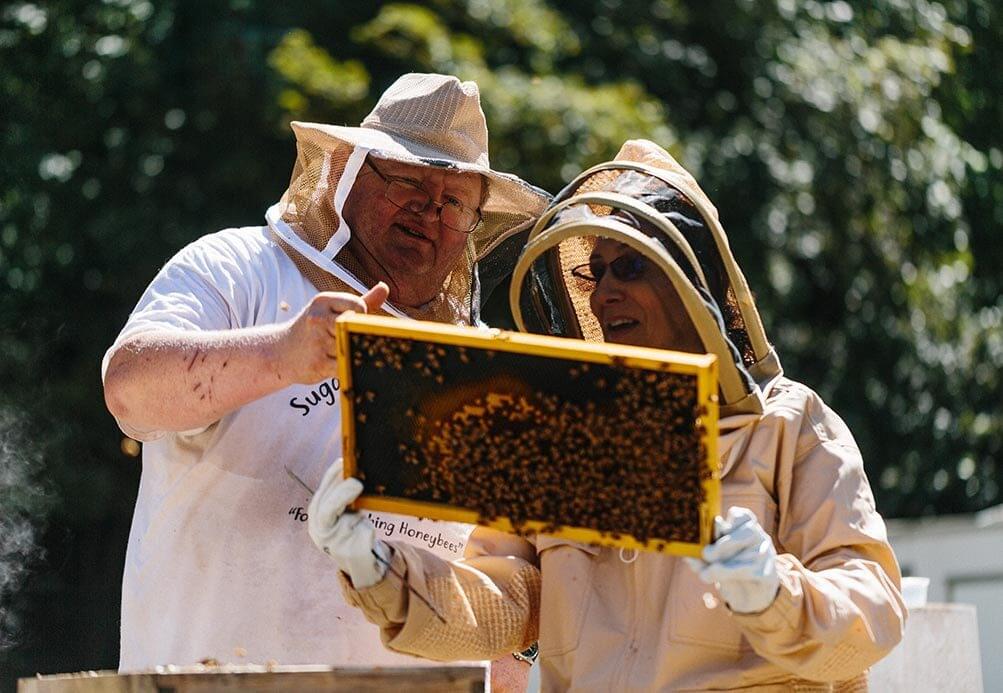 When Eric Grandon discovered beekeeping, he had no idea that the bees would give him the&mldr;