The struggle is real, but introverts are great networkers, too 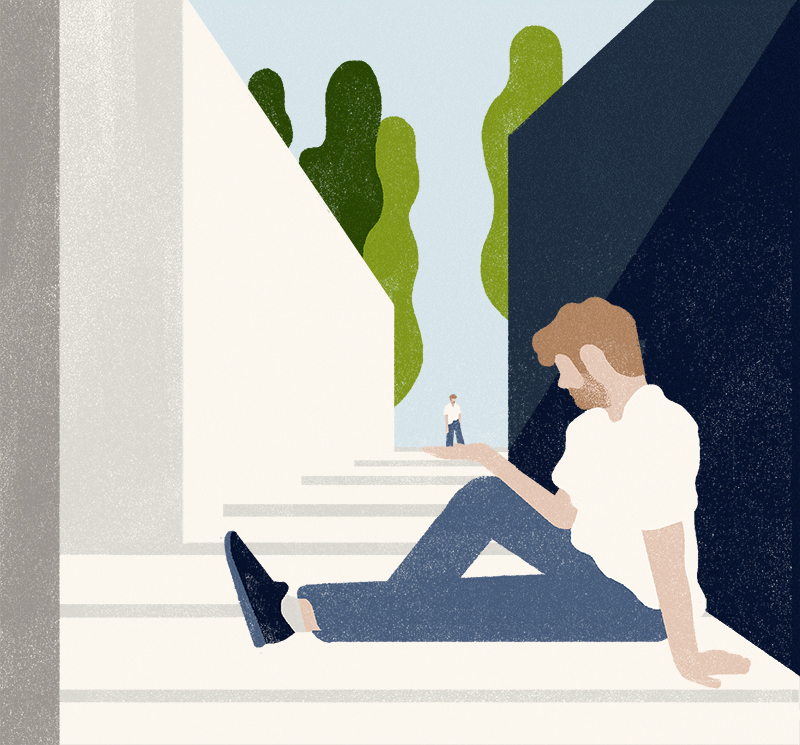 I recently attended a large trade show in New York City with the prior knowledge that I’d be writing an article on the topic of networking—more specifically, networking as an introvert. As I packed my business cards, I considered assigning myself some metrics: could I challenge myself to give out 20 cards? Was that reasonable? After all, my knee-jerk reaction to the assignment was: “Networking isn’t hard.”

While it’s true that I’ve had several career wins that came as a direct result of networking, my initial response was more likely an attempt to shore myself up. I am a hardcore introvert and networking is hard—or, it can be. To network effectively, whether in the office or out in the greater world, I have to be in a good headspace.

The “work” in networking

Networking often gets a bad rap because it calls to mind groups of people standing around in awkward cliques, wearing name tags. Or perhaps because the in-office forms of networking can sometimes more closely resemble brown nosing; some folks make a sport of asking their well-connected colleagues out to lunch or cozying up to the boss at happy hour.

At its root, networking is relationship-building. Its by-product often leads to career connections or new opportunities, but the act of networking is really about connecting with someone on a deeper level.

Networking takes work because it requires each of us to step out on a limb—to introduce ourselves, or schedule lunch, and get a conversation started. Good networkers are succinct. They’re friendly and know how to say who they are, and what they do, or what they’re looking to learn. They ask questions and, importantly, listen. But what we’re really talking about are communication skills, which introverts and extroverts alike might have in spades. So why is it that introverts—including myself—tend to cringe at the idea of networking?

The answer is biological. As it turns out, the act of networking can be harder for introverts, and learning this came as something of a relief. In the office, I spend much of my day writing, often in a quiet corner by the window. As much as I love my colleagues, and even our open-office floor plan, I isolate myself so that I can do better work. I’ve learned that the more activities, meetings, and casual social interactions I have, the more my cognitive abilities begin to slide downhill. It’s not possible for me to type with one earbud in, as some of my colleagues do, listening to music or a podcast, while leaving the other ear free to stay on top of the team’s conversation. When I’m overstimulated, it feels like I’m navigating under water and like there is a delay in all my responses.

This slowness is real. According to Dr. Marti Olsen Laney in The Introvert Advantage: How to Thrive in an Extrovert World, information travels down a longer neural pathway in the introvert’s brain. Not only is the pathway longer, but the introvert’s brain works harder to process interactions and events alongside thoughts and feelings, as well as any sensory details in the environment. The differences in the introvert and extrovert brain are excellently illustrated in a post on Susan Cain’s Quiet Revolution website. 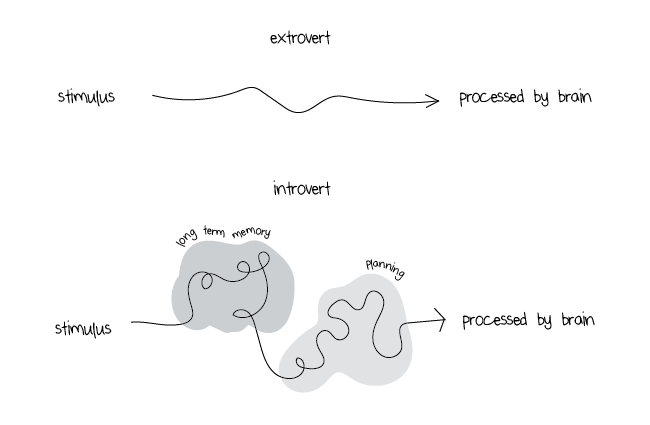 Because introverts are inherently wired with a higher sensitivity to the environment, loud, crowded networking-type events can send the introvert brain into dopamine overload, which creates anxiety and depletes an introvert’s energy reserves.

Do extroverts have the edge?

By contrast, extroverts have an energy-spending nervous system, and they seek new experiences, new connections, and anything that will keep the hits of dopamine coming. Behaviorally, extroverts also have a higher drive for social attention than introverts, but this doesn’t mean that introverts aren’t equally social animals. Research from Wellesley College suggests that introversion actually has little to do with how social an interaction is.

Instead, it’s more about whether the interaction is mentally stimulating, feels emotionally rich, or engages our artistic or aesthetic sensibilities. It’s another reason why the speed-dating feel of giant networking events, or the topical nature of more casual in-office exchanges, can make networking a tough sell. It’s hard to go deep or wax poetics within a short period of time.

Similarly, the social nature of an event or activity isn’t what drives extroverts. The study found that extroverts are primarily driven by the reward value of a situation, and this higher sensitivity to rewards “predicts whether an extrovert will enjoy a situation more than introverts.” Something like networking—mingling with strangers or colleagues, possibly to advance oneself—can activate this reward sensitivity. While an extrovert is busy working the room, their dopamine is rising to levels that make them feel happier, which itself is rewarding.

So sure, extroverts have a built-in advantage, but there’s no reason that introverts can’t network like badasses. Knowing that networking can tax the nervous system is a good reason for introverts to choose their networking opportunities wisely (and not feel bad about skipping a few).

Extroverts have a built-in advantage, but there’s no reason that introverts can’t network like badasses.

Think about which events you really need to attend. Are you trying to meet a wide variety of people, or is there someone specific you can approach to ask a few questions? It’s the amount of stimulation that introverts react to, so milling about a crowded, loud room will make it tough to forge a real connection. Introverts might consider focusing on smaller, more intimate gatherings, where it will be easier to concentrate and spark some potentially inspiring one-on-one conversation.

Here are a few more networking tips for introverts (and shy people):

Network with intention. You don’t have to network all the time, and there’s no reason to become a person who does. That said, networking with colleagues is important. These are relationships that last a long time and can make your workday easier. If you find yourself saying no to group lunches, try initiating one-on-one meals instead. Plan to network instead of feeling pressured to pull it together on the fly. Consider, too—are you avoiding networking because you feel tired, or because you’re shy? They’re two different beasts.

Use other channels. In-person events aren’t the only place to network. Balance out your parties and conferences with online networking. Twitter chats and LinkedIn are great places to connect with colleagues and industry experts from the comfort of your living room.

Mind your schedule. Plan lunches or social events for quieter days, and give yourself some down time in between. When that’s not possible, make time to take a walk around the block, or grab a coffee on your own or with someone whose conversation helps to re-energize you.

Ask questions. It’s okay to let the extroverts do the heavy-lifting at networking events, but have some questions ready in your back pocket. Try: “How did you get started in your career?” or “What kind of projects are you working on right now?” At a conference, you might ask: “What sessions have you attended so far? Which have you enjoyed most?”

Be bold. Networking events provide a perfect opportunity to practice inserting yourself into conversations. It’s as simple as saying, “Can I join you? What are you talking about?” and letting the conversation close around you after introductions.

Turn on your superpower. Everyone enjoys a rapt listener, and you might be surprised by what you hear. When networking, people are often focused on their own agenda and may miss important details or opportunities to dig a little deeper. A good listener stands to gain the most insight.

Go ahead and get personal. A meaningful conversation can be mentally stimulating, not to mention memorable. There’s no reason you can’t ask where a person is from, about their kids, travel plans, or outside hobbies. Asking about the best book they’ve read lately works, too. Personal questions can help you find a commonality and forge a real bond.

Extroverts only have the built-in advantage because they might enjoy networking more and thus do it more often. But intentional networking can yield the same results. It’s a quality over quantity game.

So how many business cards did I unload?

I went to New York thinking about networking the wrong way. My intention was to be more like an extrovert, and I imagined myself striking up easy conversations and casually rattling off my email address. Instead, it was too easy to move between sessions without talking to anyone. The conference was massive.

On the second morning, I felt the pressure of those 20 undistributed business cards but, fortunately, decided that my goal was total lunacy. Even more fortunate, I happened to make a conference friend right after that, while sitting on the floor during a too-crowded keynote. Thanks to the help of our lanyards, we quickly realized that we were both from San Francisco. After making small talk about the conference, we ended up traveling to the next session together and, before parting ways, my conference pal invited me to a networking event. It was a perfect opportunity to part with a business card—and also to give myself an out.

Like any good introvert (and shy person), I responded with a firm “maybe,” but, and with this article in mind, it wasn’t long before I saw the error of my ways. It’s true that attending a networking event after a long day at a conference wasn’t going to make for my ideal evening, but when your purposeful goal is to network, and you’re invited to a networking event, you probably should go.

Like any good introvert (and shy person), I responded with a firm “maybe,” but, and with this article in mind, it wasn’t long before I saw the error of my ways.

To make up for my hesitation, I sent my new friend a message on LinkedIn and, soon after, we were back on track. In the end, I gave out about five business cards and made a handful of LinkedIn connections. I discovered that I shared some mutual connections with a few of the women, and connected with a few others over our interest in writing. More important, I learned that when the goal is to create space for connection, rather than simply to hand out all my business cards, there’s a lot more room to talk to anyone, about anything.

There’s also a lot less pressure. The networking event ended up being fun and, afterward, my conference pal and I ventured out to explore New York City. Without meaning to, or by virtue of being myself, I made a real connection and had a happy adventure in falafel and comedy that I’ll long remember—with the added bonus of a lunch date back in San Francisco.

Heading to a conference soon? Print out this guide and tuck it in your suitcase. You'll networking like a pro all week long.

Suzanne Barnecut loves reading and writing stories of all kinds and duration. She is a frequent contributor to Relate, and creates brand content and tells customer stories for Zendesk. In her spare time, she can be found writing fiction, reading The New Yorker, and consuming (too many) pastries from San Francisco’s bakeries. Find her on Twitter at: @elisesuz.